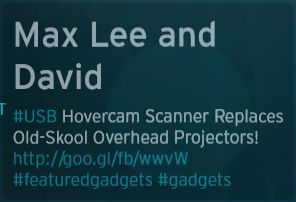 Limitation is the mother of innovations and twitter hashtags is a wonderful example of it.  Twitter is one of the fastest growing website with more than 600 tweets per second. And it was becoming too difficult for the tweeple to keep track of the topics of interests with more and more tweeple following each other. And hence the #tag was born.

Hashtags are a community-driven convention for adding additional context and metadata to your tweets. They’re like tags on Flickr, only added inline to your post ~ via Search Engine Journal

Twitter provided no easy way to group tweets or add extra data so the Twitter community came up with their own way: hashtags.  A hashtag is similar to other web tags- it helps add tweets to a category. A hash tag is simply a way for people to search for tweets that have a common topic.

Hashtags have the # symbol before the keyword.

It’s not case sensitive so #google and #Google is one and the same thing.

This snapshot from siesmic shows a tweet with #USB #futuregadgets and #gadgets . This signifies that the tweet emphasizes on usb, featuredgadgets and gadgets and has information about some usb gadget that has been featured on the article that can be found on that particular shortlink.

How does it work?

The words that are preceded by # are treated special by Twitter. They become the keywords and kind of help the users track the tweets and trends in a better manner.  #tag has more weight than a normal word without a # when searched for.

Suppose we are searching for tweets related to newly launched Buzz by Google. We just need to look for the #Buzz or #Google and this would list the tweets that contain any of these two #tags in them.

Suppose we want to start our own trend then we need to just decide on a keyword. And before just going ahead with adding a # to it and start tweeting we just need to check whether the #tag already exists. If it doesn’t we can use it and then tweet and tell our friends about out #tag and start a trend of our own.

The larger the number of tweets containing a particular #tag more popular it gets and hence has a higher trend. To check what are the trending topics [#tags] check out #hashtag.