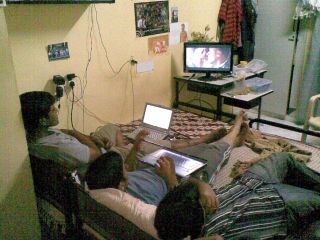 Sweet smell of butter filling the surroundings, sound of bullets in the background along with the pops of popcorn, coffee sizzling and the sweet aroma filling the room, such is the environment in A 709 of Symbiosis Infotech Campus at 1 AM.

Just to simplify all the above we had Public Enemy running on a 20 inch LCD along with some office apps running  on the Mini*, popcorn being popped for the late night movie in Gajju’s innovative and multipurpose kettle, along with sizzling hot coffee and butter bite cookies.

The life in A 709 starts after 12 AM when we return after wasting out whole day in classes or workshops along with a couple of utilized hours in gym and swimming pool. If it hadn’t been for these two hours we would have been dead. Someone truly called this place home away from home [I would have given the due credit but I’m sorry that I forgot the name of the gentleman].

As it seem from the above text that we are so busy studying but it’s not at all that way. More than half of our classes get cancelled, presentations postponed and evaluations delayed. We get a hell lot of time to enjoy but only a few smart people are aware of the ways to make the most of these hours. Whether it’s a quick game of Table Tennis, Basketball, Volley Ball, a mini Cricket match or an hour’s sneak peek into the gym or the swimming pool. 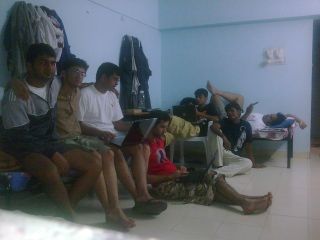 The few of us who have always thought of this place as a home really feel like at home on a long vacation. There are no worries about getting up late for the classes or missing an evaluation or two. Everything is manageable because we are management students and at least this much is expected from us. Those who thought that we are wasting our parents’ hard earned money are morons because they are wasting their time thinking about us while we have fun, we who don’t matter to them in any way. 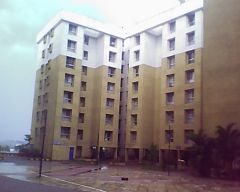 UPDATE: Management has still not taken any strict action agains the mess contractor and instead they have blamed the hawkers that sell tea and other eateries outside the campus on the college road. The food that we get on the road is far better than the mess food and the management blaming them is a direct indication of them being on the side of the contractor. I apeal to all the suffered students and other to help us get them changed if not penalized. It has been a severe crime playing with the lives of more than a hundred students of which some are still hospitalized. Many who have been discharged are still not in condition to attend the classes.

Some students have been discharged from the hospitals and few more have been admitted later in the day on 19th. Management says that all students are fine and recovering. The reality is better witnessed in the campus in the form of the fear of mess food in students’ eyes. People have stopped eating in mess.

Yesterday [18 Jan] more than 150 students of Symbiosis Infotech Campus, Pune had to be admitted to at least four different hospitals due to food poisoning. Several students complained of health issues and vommiting after the dinner and were rushed to hospitals.

On the other hand the management says that not many students ate at the college mess. I doubt that because that is not possible on a weekday that too a tuesday. And by saying so the management itself says that the food they provide is so bad that students prefer to eat outside despite the mess fee being compulsory for all students.

There have been several complains for the food quality but all fell on deaf ears. At times they dont even follow the pre decided menu. People even have found roaches and glass shards in food. The mess contract is handled by Tammana group of hotels. Leave the mess food the service they offer at their restraunt a few meters from campus is also not worth mentioning. They are too bad at service but still they have the contract we dont understand why.

Here is the story in different colours as covered by media…

I am a student of Symbiosis Centre for IT which is in same campus with SIIB and SCMHRD and we have common infrastucture including the mess which some news has mentioned as “canteen”.

Looking forward to proper action being taken on this.