Isis, the collaborative mobile payments venture initiated by three major U.S. telecom carriers, is scaling back its efforts to compete with the credit card industry.

Created in a joint effort by T-Mobile, Verizon and AT&T, Isis first aimed to allow customers to pay for purchases at retailers by using their smartphones, with a network of payments independent of credit card companies. Purchases and account information would have been handled by the carriers.

Instead, Isis now has its sights set somewhat lower.  Isis is now working to produce a sort of “mobile wallet.” Customers will still use their smartphones to pay for purchases, but instead of an independent payment network ran by the carriers, the phones will use your existing credit card information.

Isis had already enlisted the help of Discover Financial Services to start the venture’s payment system. But Discover is no Visa or MasterCard, and merchants weren’t keen on the idea of cutting out the two giants.

And why should they? There’s really no need to reinvent the wheel, just to create an enabling technology which leverages the parts that already work, and make it better. The point is to replace a wallet full of cards, not create new cards. Google will announce a new mobile payments system, adding even more urgency to the all-out arms-race taking place in the point-of-sale digital money space. The announcement will include news of a partnership with mobile service provider Sprint to roll out a mobile-payments system based on Near Field Communication, or NFC, technology.

NFC-fans believe the technology will become the standard format for mobile payments. Google’s plan to begin testing its own mobile-payments system was reported months ago, and will install thousands of NFC units made by VeriFone Systems at merchant locations in New York and San Francisco. 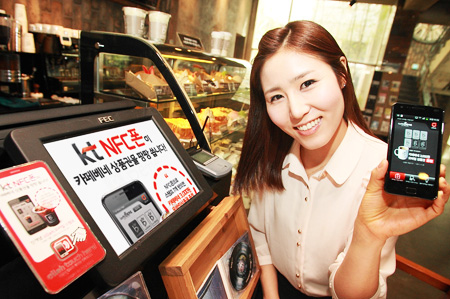 Near field communication (NFC) is emerging as the hottest keyword in the telecommunications industry. Both mobile carriers and handset manufacturers are eyeing the technology as the one to accelerate toward a truly smart life.

To use a transport card, one only has to have it close to the card reader. They don’t need a communication network. Such wireless communication using tiny computer chips and a radio frequency is called radio-frequency identification (RFID). NFC is a kind of RFID using the 13.56 MHz frequency.

The most notable feature of NFC is that it enables bidirectional communication. Instead of only storing and sending the information to the reader, NFC makes it possible to read and write information on other devices.

NFC works only within a radius of 10 centimeters. Kim Jong-dae, a researcher at the LG Economic Research Institute, says such distance limitation is a strength, rather than weakness, of NFC.

“That could be a fatal defect if NFC is used alone for communication, but it turns into a merit when coupled with other high-speed communication methods such as 3G and Wi-Fi,” he said.

He cites the use of a smartphone with NFC as an example. The user chooses the device he wants to use and puts his smartphone close to it. Hacking and the leak of private information have become a serious problem in the current smart era, but NFC is safe from such threats. Hacking isn’t possible as communication won’t work from a distance of 10 centimeters. As the user doesn’t have to enter a username or password to use the service, there is less chance of hacking.

NFC is not a new technology. It was first developed by Sony and semiconductor company NXP in 2002, but it didn’t receive much attention due to lack of infrastructure and expensive chipsets. The condition has become more favorable. It took an additional 100,000 won to buy a smartphone with an NFC chipset, but the price of the chipset has gone down to 2,000 to 3,000 won recently. NFC smartphones have become widely available.

“Only around 3 percent of cell phones had NFC, but it is expected to grow explosively from this year,” Kim said. Google started supporting NFC from the Gingerbread version of its smartphone operating system Android, and manufacturers like LG and Samsung announced they will upload NFC to most of their smartphones. Nokia and RIM are also planning to include NFC, and so is Apple on its iPhone 5. The government is also leading the standardization of the technology.

Smartphones have brought about many changes in daily lives though it’s been only a couple of years since they became widely available. NFC is bringing in even more changes, as seen in the introduction of smartphones equipped with NFC. The mobile card service, which turned smartphones into credit cards installed in small chips, is popular here for its convenience.

“Some use NFC for mobile card payments. However, this is only one of the numerous services based on NFC,” Kim at LG Economic Research Institute said.

“While watching home shopping channels on smart TV with NFC one may just touch the smart TV with the NFC smartphone to buy the product instead of entering usernames and passwords,” he said.

Such smartphones are opening new doors to the mobile service by enabling communication with diverse services that have only been offered offline. By tagging NFC onto smartphones, one can buy tickets, receive information on tourist sites, verify the user on a computer or start a car engine. “Instead of exchanging business cards, people may just hold their smartphones close together to transfer the information. The technology will make all this possible,” Kim said.