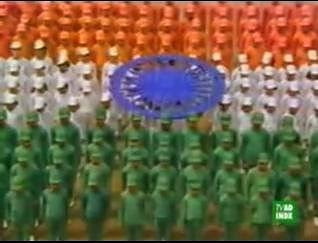 It was India’s 60th republic day and the stage was perfectly set for the re-launch of one of the India’s most popular anthem on national Integration; yes it was “Mile Sur Mera Tumhara”. In it’s 61st year The Republic of India stepped up its quest for becoming a superpower by 2020, just 10 more years before it reaches there.
The album too was aptly titled “Phir Mile Sur Mera Tumhara” coming to re-establish the fact that the diversity in which we live is the key strength to our nation’s success. The original score had come at a time when India was reeling under IMF sanctions and zero foreign exchange reserves.
Today the challenges have taken a different face. Recovering from recession, we are growing at constant pace but the economic divide is widening as well,giving rise to internal extremism in various forms. India is bugged by regionalism and its politics. India’s immediate neighborhood is no better; with couple of failed states and unstable economies they project a truly grim picture of the future. Sudden rise of middle class of two huge consumerist economies (China & India), pose an uphill task for agriculturist to increase food grain production by leaps & bounds. The global warming and climate change predictions give no respite.

So it was a right time to “Phir Mile Sur Mera Tumhara”, but unfortunately the album fails to match the charm of original one. The “Common Man”, itself is missing from the prolonged video. It is bollywood overdose of a kind. The words from Amitabh Bachan set amongst renovated background(renovated after 26/11) of Gateway of India and Taj Hotel give a perfect beginning to a song to become an epitome of strengthened India. However Bhart Bala’s recreation of eternal song loses track immediately. The original Mile Sur too had several actors representing various regions of country. But they were shot in such a way that actors were looking as good as any common man of that region. Take for instance Om puri sitting with a farmer family & singing the “mile sur” in native language gives a completely different impact than Deepika Padukone in western attire singing similar lyrics. It is unfortunate that several national icons like Vishwanathan Anand and Sachin Tendulkar have not been shown. The video fails to project the real picture of India. It is highly bollywood centric and projects as if India is all about bollywood artists and nothing more. I do appreciate the greatness and talent of all the artists in the video, but then they are just a small drop in huge ocean of talents & traditions that India is really made of.
Leaving me little disappointed about Phir Mile Sur, I went back to the old & original version of Mile Sur Mera tumhara…..to Sur bane hamara!!! And relived the memories again…
Jai Hind..!!