Are you tired of havinf numerous emails in your Gmail box and want to get rid of all the unread mail?

I faced a similas situation and wanted to get rid of that bugging number which reminded me that how lazy I was or from how may useless places the emails came to me. So I decided to get rid of it and Googled how to do it. Got a post at Lifehacker that tells how to do it. I have added the screenshots too to the instructions at Lifehacker to make it easier for the not so savvy ones.

Go to your Settings/Filters page and create a new filter.

In the Has the words field enter “is:unread” (without quotes), and click the Next Step button.

You’ll get a message warning you that this type of filter won’t be applied to new mail, but that’s OK.  Click OK to continue.

Check the boxes next to Mark as read and Also apply filter to … conversations below. 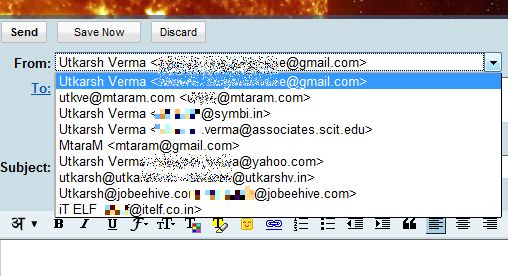 One glitch here is that not all email service providers allow you to forward the email for free.

This is how to go about adding other email addresses.

There what you see is something like the picture down here. 4. To add another email address click the button that says “Send emaul from another address”. Here you can specify the mail server or use the gmail default. I recommend using the gmail server.

Click send verification code. This sends a code to your mailbox. [the one that you entered above]

Goto your other mail box that you specified and there you will find a verification link and code. Either you click the or copy the code and paste in the box and click verify.

Then when ever you are in the compose window you get to select which address to send from via a drop down menu.. And you are done. This would allow you to send email from the all the addresses that you add to your gmail account.

And in order to get the emails that come to your diferent mailboxes in this default gmail account you just need to configure the autoforward option. [yahoo and hotmail dont allow auto forward for free].

Gmail has long had keyboard shortcuts, though learning them can be difficult. Enter the Gboard, a specialized mini-keyboard for Google’s e-mail service. It debuts this Friday at an asking price of $19.99.

The Gboard consists of 19 colored keys set in a standard size numpad-only keyboard. Clicking on any one of these performs that particular keyboard shortcut. Included are Gmail-specific features such as starring messages, starting a search, and jumping between message threads. Outside of Gmail they simply act as normal keyboard buttons, and will type in whatever letter or number corresponds with that shortcut.

The device is powered by USB and requires no special software or drivers, however users need to first enable keyboard shortcuts within Gmail’s settings before using it. Also worth noting is that it was created not by Google, but by Charlie Mason, a film producer from Venice, Calif. This is his first foray into the computer hardware business.

The Gboard consists of 19 keys, all of which act as shortcuts within Google’s Gmail Web mail service.

This really is a product that users will either love or hate. Those who have mastered Gmail’s shortcuts will see little need to buy special hardware and find a spare USB port to plug it into. Meanwhile, newbie users may be unwilling to take the plunge on such a specific peripheral for a program that works only within another program (the browser). The Gboard runs the risk of being an unappealing prospect to both parties.

It’s also not the first attempt at easing the process of learning and remembering shortcuts. This time last year Google offered users a free pack of color-coded shortcut stickers that could be tacked onto any keyboard. There have also long been specialized keyboards for video and audio editing as well as graphical design–all of which provide similar, color-coded keys. Users who don’t want to commit, or tack stickers on their keyboard, also have the option of buying a silicone keyboard mat, though no such thing has been created for Gmail.

Considering there are a total of 69 Gmail shortcuts (with more on the way if Google graduates some of its experimental features from its labs section) the Gboard could just be the first step toward creating a full-size (100 plus key) version. In the meantime, its early December release and low price tag make for a good stocking stuffer if you’ve got a Gmail lover in your family.

The good:
• No setup required
• Color coding is logical and makes it easy to learn the keys
• Good build quality and feel; keys are flat like on a laptop
• At $19.99 it’s not that expensive. Most numeric-only keyboards cost about the same.