I have always been fascinated with multiple displays and I always wanted to have a multi monitor setup for myself. I firstly became aware of such a concept when I bought Ati Radeon 9200 long time back. Then I realized that I could hook up two monitors to my box… one on the 9200 and the other on the onboard intel one… The 92o0 also had the option to hook up a TV.

Currently on my wish list is the ATI EYE FINITY.

I have an XPS 1210, I love to chat, watch movies and documentaries and google around. XPS 1210 being a very small machine has a screen of just 12 inches and thus at times it becomes difficult to watch movies and do other things at the same time. One more thing that i like to do is Google for any thing that I find interesting in a movies or a documnentary and to do that I have to stop the video. So I decided to buy a LCD monitor and extend my work space. I zeroed in on AOC 20′ 2036Sa. It not at all expensive and has great response.

Following is a guide to setup multi monitor setup.

Windows 7 has some neat little enhancements, one of them being how it lets you handle dual monitors. If you’re adding a second monitor to your Windows 7 home or office PC, which is a very good idea, it’s a breeze to configure.

There are actually two ways you can currently setup multiple monitors in Windows 7, either by using a keyboard shortcut or via the traditional system properties.

I really like the first method since it’s new and is way easier than having to go into the Control Panel or anything else.

Simply press the Windows key and P (Windows + P) to bring up a quick menu of options.

The second way is to right-click on the desktop and choose Screen resolution. 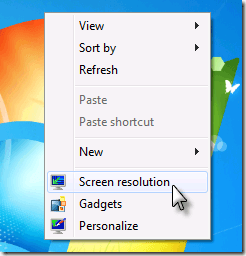 Now you’ll see the familiar 1 and 2 to distinguish which monitor is which. There are several options and under Multiple Displays, you can choose from the same options as when you pressed Win + P. 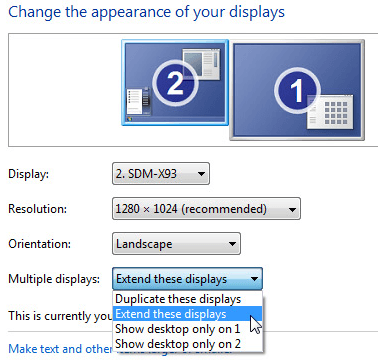 That’s it! You can also change the orientation of the displays and change the resolution of each display. It’s pretty straight-forward in Windows 7 and a lot easier!

Apart from this if you are extending your desktop then you can chose the location of your second display. That would decide the movement of the mouse. Suppose you keep the second display on right then moving the mouse beyond the right edge takes the cursor to the secreen 2. Similarly u can keep the second screen either in left or right or top or even bottom.