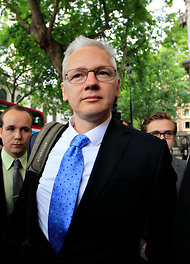 In a shift of tactics that has alarmed American officials, the antisecrecy organization WikiLeaks has published on the Web nearly 134,000 leaked diplomatic cables in recent days, more than six times the total disclosed publicly since the posting of the leaked State Department documents began last November.

A sampling of the documents showed that the newly published cables included the names of some people who had spoken confidentially to American diplomats and whose identities were marked in the cables with the warning “strictly protect.”

State Department officials and human rights activists have been concerned that such diplomatic sources, including activists, journalists and academics in authoritarian countries, could face reprisals, including dismissal from their jobs, prosecution or violence.

Since late 2010, The New York Times and several other news organizations have had access to more than 250,000 State Department cables originally obtained by WikiLeaks, citing them in news articles and publishing a relatively small number of cables deemed newsworthy. But The Times and other publications that had access to the documents removed the names of people judged vulnerable to retaliation.

WikiLeaks published some cables on its own Web site, but until the latest release, the group had also provided versions of the cables that had been edited to protect low-level diplomatic sources.