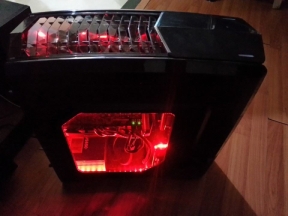 I planned to set up a mining rig which would allow me to play a game or two with almost all the eye candy one. I do test rigs and advice friends basis the component availability. I have focus on efficiency rather than just the statistics. I had planned to setup a R9 280x based rig but had to settle for a 270x as 280x was not available in India at that time.

The data is pertaining to India and alot better prices will be available abroad. One can opt for a cheaper processor for AM3 socket which would reduce the cost further. I wanted to game as well so didn’t want that to be a bottleneck.

The above can decently mine at 410+Khash/s at less than 70 degrees. The cabinet has 5 fans for the airflow.

I would recommend to buy a motherboard with at least 2 PCIE 16x slots so as to have room for upgrade if you wish to add another card for mining.

I had to order another Gigabyte motherboard which can support 2 full slot cards and another 2 on ix slots via riser cable.

I would also recommend a beefier power supply just in case you don’t want to run on two separate PSUs.

Refer this post for my mining commands and config.