One of India’s most trusted and credible NGOs, GiveIndia is taking part in a competition on Facebook to win a US$1 million grant. The winner will be the NGO that gets the highest number of votes from Facebook users. The prize of $1 million will help put or keep 40,000 children across India in school for one year.

What’s really sad at this point is despite our population, we are in the 65th position. Hopefully bloggers can make a difference. Do vote and spread the word.
Check the Give India Blog and their website. But do vote first!

BarCampI2IT (barcamp isquareit) is going to be an ad-hoc un-conference organised by the Post Graduate (Management & Technology) Students of International Institute of Information Technology, Pune. Where participants will discuss and share their knowledge / ideas / suggestions about Emerging Technology, Softwares, Networking, Management, Innovation, Web, Opensource, Entrepreneurship etc. by giving sessions, moreover personally interacting with each other.

Anyone with something to Share or with the desire to learn is welcome and invited to BarCampI2IT.

Main Objectives of BarCampI2IT are:

The trees smile with their sprout
of tender leaves and blooming flowers,
Eternal nature with its transient expression.
Hails spring with ecstasy and joy!
Bewildering shades with so many tinge.
The land of beauty and greatness,
India, witnessing color of happiness and peace.
Nation come alive to enjoy the spirit
A celebration of color- Holi!
An experience of content, harmony and delight.

There are many legends given as the reason for celebrating ‘Holi’. There is one popular legend that is reputed to bring about the birth of ‘Holi’. It seems that long ago there was an evil king named King Hiranyakasipu. His son, prince Prahlad however was very holy and often prayed to God and this infuriated his father. One day, the wicked king ordered his sister, the demon Holika, to kill his son. The demon Holika, who was immune to fire, captured prince Prahlad and entered a fire furnace. She had done this to kill the prince, however it was her who was burnt to ashes. Prince Prahlad was safe and was not burnt at all. The legend goes that before the demon aunt died, she begged for prince Prahlad’s forgiveness and the prince forgave her and announced that her name would be remembered once a year. Thus the festival ‘Holi’ was created. 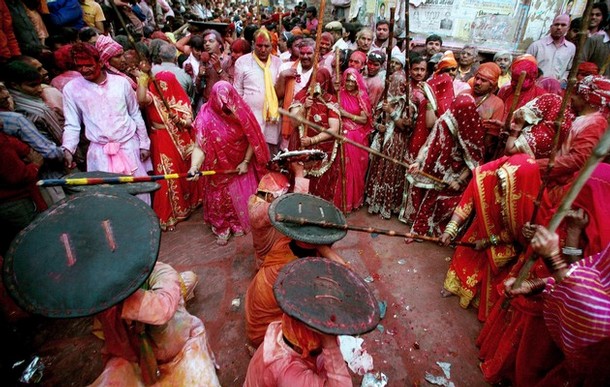 There is also another story behind the festival of ‘Holi’ and it is based on the everlasting love between Krishna and Radha. It seemed that in the Hindu mythology Lord Krishna was known to court Radha and the light-hearted mischievous courtship of his was linked to Holi. Thus Holi is known to be the celebration of love between the two of them.

To start off the festival, preparations are usually made on the eve of Holi: huge bonfires are burnt as a symbol of its representation. These fires are created to ward off evil spirits around the place.

‘Holi’ is grandly celebrated in villages around Mathura, the place where Krishna is said to be born. Before the start of the festival, shops are busy selling ‘Gulal,’ the colored powders, and it is no surprise that the shops are flooded with festive shoppers. In preparation for the festival, new clothes are also bought for the family: it is a tradition for mothers to buy new clothes for their married daughters.

On ‘Holi’, mothers let their children go out on the streets to indulge in the splashing of colors. Men like to wear white ‘Kurtas’ while ladies prefer to wear white saris, or ‘Salwar Khameez,’ on ‘Holi’.

One thing that is very attractive about this festival is the spirit of the people who celebrate the occasion.

Whether they are young or old, all the people are lost in the joyful occasion, having fun throwing colors at each other. Even water balloons would be thrown at each other.

When they splash colored water on passer-bys, it is common for the passer-bys to get involved in the color riots themselves. Even kids love this festival, as they enjoy being drenched in colored water.

On this happy occasion, dances and folk songs are also important features in the festival. 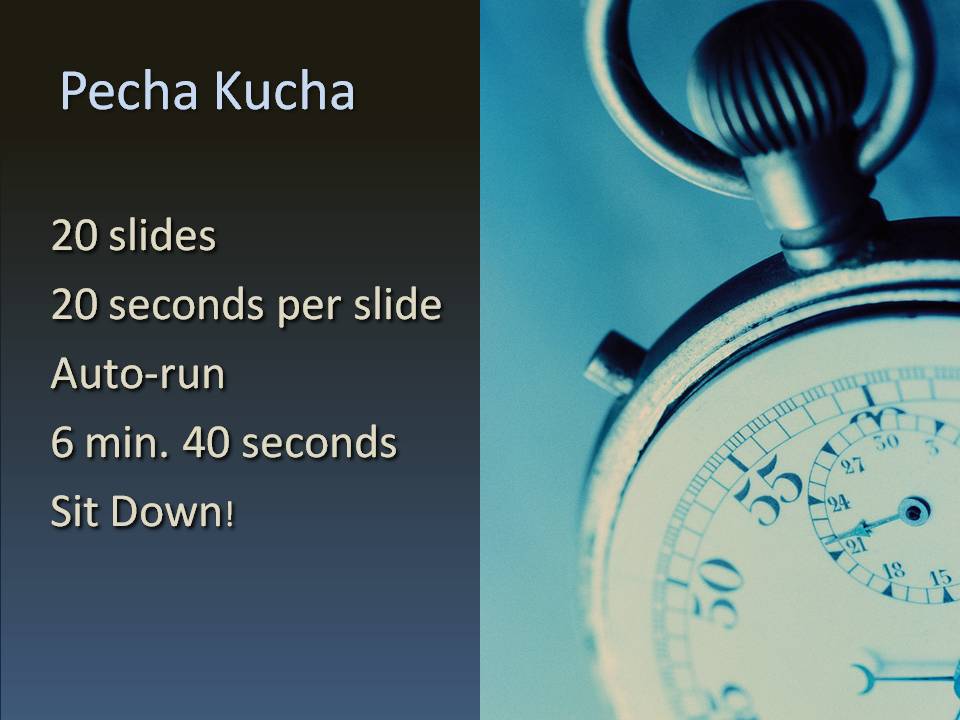 Pecha Kucha Night was devised in 2003 by Astrid Klein and Mark Dytham of Tokyo’s Klein-Dytham Architecture (KDa), as a way to attract people to Super Deluxe, their experimental event space in Roppongi. Pecha Kucha Night events consist of around a dozen presentations, each presenter having 20 slides, each shown for 20 seconds. Each presenter has just 6 minutes 40 seconds to explain their ideas before the next presenter takes the stage. Conceived as a venue through which young designers could meet, show their work, exchange ideas, and network, the format keeps presentations concise, fast-paced and entertaining.

In 2004 PKN began running in a few cities in Europe, and has since spread virally since has become a worldwide phenomenon, now running in more than 260 cities in almost every corner of the globe.

A typical Pecha Kucha Night includes eight to fourteen presentations. The presenters (and much of the audience) are usually from the design, architecture, photography, art and creative  fields, but also often includes those from academia and the business world.

One of the attractions of Pecha Kucha Nights is the wide range of the presentations. Most consist of design professionals showing their creative work, but presenters often speak about such topics as their travels, research projects, student projects, hobbies, collections, or other interests. Organizers is some cities have added their own variations to the format. Variants include Pecha Kucha mash-ups with other Japanese pop-culture contributions: Pecha Kucha karaoke (creating a narrative of someone else’s slide show) and Pecha Kucha Iron Chef (dueling presenters competing for audience appreciation).

In Pune, the first PKN was held on October 23’09 and had 90 people in attendance.

Twelve individuals from the fields of dance, journalism, architecture, fine arts, poetry and literature met at well-known architect Christopher Charles Benninger’s office. The presentations included a slide show on the evolution of a chair by senior architect Shrikant Nivasarkar, Falguni Gokhale’s journey as an artist; Varsha Gavandi’s interesting facts on Chinese gardens and demonstrations on the finer nuances of classical dance by Kathak dancers Kaveri Agashe and Sheetal Kolwalkar.

Never did I know that today was going to be a memorable day of my life. Woke up as usual at 930 am and went back to sleep only to get up at 11 am. Had some work to do with one of my school friends who had come to home [Lucknow] and I had come to home too for some reasons. I finished up with my annual ritual of fixing the lights and connecting them up by 12 pm. My friend arrived at 1230pm. We went with one more friend to Mc Donalds for lunch and then back to my place to do some work. In the evening We went to meed another friend and that lead to visiting one more friend who I had met last time in 1998. The day was going to be awesome. One more school friend happened to meet us at the same place whom I had last met in 2003. Then on my way back I met one of the sweetest person…. my girlfriend since class 6 [1992].

The day could not have been better. [Happy Diwali to me] 🙂 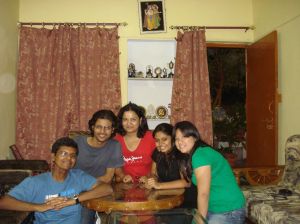 we all were together in class 8

May This Diwali be as bright as ever.
May this Diwali bring joy, health and wealth to you.
May the festival of lights brighten up you and your near and dear ones lives.
May this Diwali bring in u the most brightest and choicest happiness and love you have ever Wished for.
May this Diwali bring you the utmost in peace and prosperity.
May lights triumph over darkness.
May peace transcend the earth.
May the spirit of light illuminate the world.
May the light that we celebrate at Diwali show us the way and lead us together on the path of peace and social harmony
“WISH U A VERY HAPPY DIWALI” 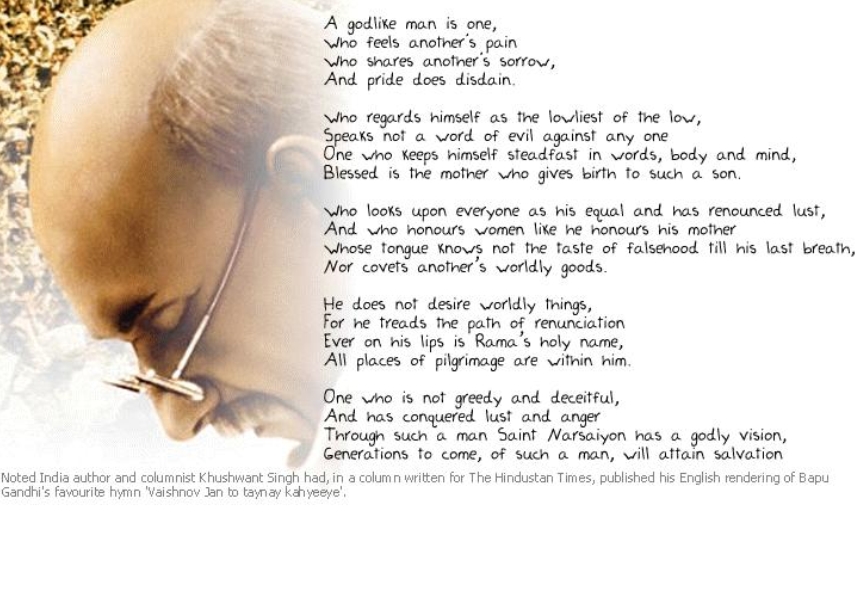 Yesterday I was sent for a workshop by NEN to MIT Pune with two of my colleagues. We were there to learn something about E Cell [Entrepreneurship Cell]. We had formed such a forum in our college by the name of iT ELF [information Technology Entrepreneurship and Leadership Forum] which apart from entrepreneurship also focuses on developing leadership qualities.

We started off with registration and a few basics about E-Cell or for that matter any committee or forum on campus. we proceeded through creating a two year plan for our iT ELF, segregating activities in different types and then evaluating what all we have done and what is left to be done.

Basically it all was about the three stages- Awareness, Intermediate Knowledge and Regularizing the activities and finally Institutionalizing it.

It was a great experience and we cant wait to impart our learning to our fellow members of iT ELF and implement what we have learned.

After 2 hugely successful blogcamps, BlogCampPune and BlogCampMumbaiStyle and a gap of 2 years we are back with the 2nd edition of BlogCampPune. We are very excited to set the Pune blogosphere buzzing again 🙂

What’s it all about?

BlogCampPune is a FREE unconference focusing exclusively on blogging, organized by bloggers for bloggers. It‘s built upon the principles of the famous BarCamp (ad-hoc unconference) focused on sharing, learning and new ideas. This is going to be an intense event with discussions, demos and interaction between attendees. Any blogger who wants to contribute is welcome and invited to join. In the spirit of BarCamp, if you attend, be prepared to present something (even if it’s just 10 minutes).

The Registrations for the Blogcamp Pune 2 has started. Grab yourself a ticket right away. http://blogcamppune.eventbrite.com

Speak at the Blogcamp Pune

If you want to speak on a topic or run a session/discussion at the Blogcamp Pune please mention your idea while you are buying the ticket. http://blogcamppune.eventbrite.com

Tata nano has proved to be luck for me. My first post about Nano was last year on January 26 when I was travelling in train for my MBA admissions process. I got a mail from one of my best friends Sachu who is an ASM with Samsung. The mail inspired me to write about the car and its competetors. Its been a long story from there on and the hits on my posts have been increasing but the number of hits on Tata nano article were overwhelming… more than 800 hits on a single post in a day… Its too much for me… I am elated… hope this kind of response continue.

I am thankful to all my reader.