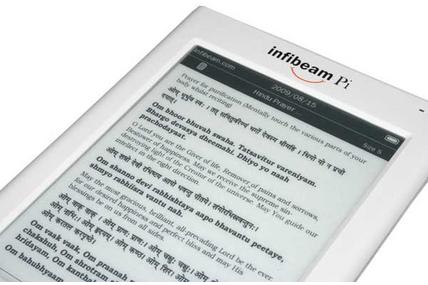 While the silicon valley and numerous Apple fan-bois are busy praising the iPad, here in India, Infibeam, the shopping portal has come up with its own eBook reader. The eB ook reader is called “Pi”. Amazon has recently launched its own Kindle, followed by Apple Launching the iPad, which can be used as an eBook reader.

One lakh digital books are available to Pi owners from infibeam.com. The company plans to add more books over a period of time. Pi gives users the option to upload their own content from a PC or any other device via USB.

Infibeam.com is also in advance talks with a number of newspaper publications to provide subscription based access to the large amount of newspaper content to its consumers. And it’s not just a eBook reader unlike Amazons’ Kindle, but it is also equipped with music playback option. Features and specifications includes:

“The idea of Pi has been with us for the past two-years and a lot of R&D effort has gone in the same. We are proud to have created India’s first-ever reading device. Pi should not be seen just as a device but has great socio-economic  ramifications, just imagine a doctor consulting his latest medical journal on the fly, or a lawyer looking at the latest case laws or even students having access to his text book in less than a 180 gm device. We can look at many such applications that have the potential to redefine how Indians view and look at content,” said Vishal Mehta, founder and CEO, infibeam.com.

Priced at 9,999 INR, this looks like a good purchase. You can preorder it from the official Infibeams Pi site for 999 INR. Infibeam would start shipping the device from February 22, 2010.