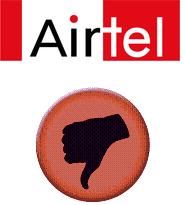 I have been a loyal customer of Airtel untill recently when they started to call me regarding one number which I had never applied for nor am aware of. They say that the bill of tha number which is in excess of 3k is pending and I would have to pay it. They crossed their limits when they barred my real number because of that previous number which I have been telling them since more than six months that It doesnt belong to me. The customer care executives are hell bent on the fact that It was my number and there is no way that any one else could have got that number other than me. This had happened with me once more while I was working in Delhi. That time they forced me to pay the bill of some unknown number just like this. But this time I am not going to pay some one elses bill even if I have to now move away from Airtel. The customer care executives are totally unaware of what to do. Nodal oficers dont reply and if you pay a bill at their centre in cash they take more than 3 days to update the same and charge you for the late fee in next months bill.  Airtel is bringinf shame to itself and its customer service level is deteriorating day by day.