India’s Tata Group says it is planning to produce hybrid versions of its Nano, billed as the world’s cheapest car. 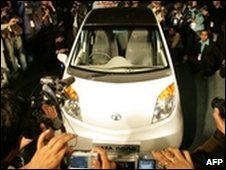 Ratan Tata, the chairman of both Tata Group and Tata Motors – the biggest vehicle producer in India – made the comments on a visit to South Korea.

A hybrid vehicle typically uses two or more distinct power sources to move it, usually petrol or diesel and a battery.

Mr Tata also said that low-priced goods would drive sales faster than high-end ones in India.

And he predicted this so-called price revolution would also continue to spread across the world.

The chairman did not provide any further details on the possible launch of cheap hybrid versions.